This little girl understands that the single most awesome character in the star wars universe is none other than Darth Vader. I too would bow before his greatness and join him fully embracing the dark side. With the power of a Sith Lord and the might of the imperial navy I could crush the federation and end the pathetic career of those serving on the NX01

Posted by Unknown at 7:34 PM No comments:

I need to blog more. My wife is doing it now and begging me to do the same. So this blog that has died and returned and died has once again returned. The problem I have been having is not writing or finding the time. The problem is watching Star Trek enterprise.

This show is terrible. Luckily its only 3 seasons long. 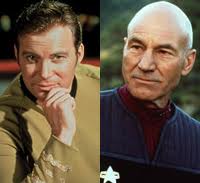 and then comes the awesome of these fine two men.
So my plan is to try to post an episode at least once a week, also I plan on being a lot more cynical then I have in the past, it will be less episode recap and more hate. Expect lots of verbal feces throwing at the faces of Archer and Tripp. Expect lots of other posts about things that ARE awesome like Shatner, TNG and Warp 11.

I need an outlet for writing, and instead of a new blog I will inflict my wrath upon Enterprise.

Peace and long life.
Posted by Unknown at 4:17 PM No comments:

The captain is posing on the bridge for a picture to be posted at starfleet command. Why anyone would want to see this guy I have no idea. Its a good thing people like Kirk, Sulu and Spock will come along soon and made Star Fleet not suck. 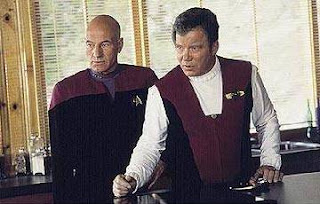 Real captains
The ship suddenly stumbles upon a Rouge Planet! A planet that has broken away from its natural orbit and is drifting out into deep space. Upon investigation they find that there is a ship hidden on the surface, it belongs to the Eska who come from another planet for a traditional hunt of this planets native drayjin - A shapshifting cunning creature that apparently is delicious. 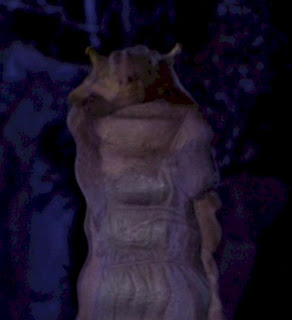 Tastes like Chicken
Althoug the species can shift into huminoid form, and speak - begging for its own life - the Eska refuse to believe it is sapient. Armed wit this fact Captain Archer, Trip and T'poll decide to go on the hunt. 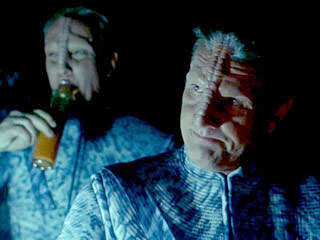 Hunting sober is like fishing...sober
During the hunt Captain Archer sees a mysterious woman out in the woods - who promptly runs away the Eska think Archer was just drunk - Eventually it comes to us that the Woman is a drayjin and she wants Archer to help protect her people. He agrees and using a scheme right out of scoobie doo we defeat the evil hunters and fly off once again on our merry way. 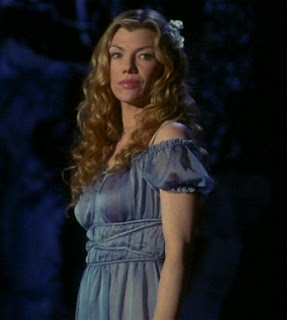 Hey stupid! Communication = Intelligence!
So to recap: The shapesshifting evil non intelligent slug creatures - who can talk to those and beg for there lives turn out to be sapient, and Archer who was helping to hunt them down with a goal of eating them becomes a hero.

The Enterprise runs across a small Vulcan ship and is hailed. The ship belongs to an order of Vulcans that has devoted themselves to find balance between logic and emotion and thus act much more "human".

The ship is in need of some repairs, so the crews of each vessel intermegle and get to know one another. T'Pol is basically ordered to work with the Vulcans, something she shows discomfort with at first and later comes to accept. She is convinced by a member of the order to try to find balance and experience emotion herself, she tries - has some bad dreams and later is mind raped during a mind meld with the crew member. She ends up in the sick bay and Archer sends the other ship on its way. Archer being the gentleman that he is does not apologize to T'Pol for putting her in the situation.
Posted by Unknown at 12:13 PM 1 comment:

I hate Trip. He is by far the worst Star Fleet officer I have ever seen. In this episode Trip and Malcolm Reed get stranded in a shuttlepod during a survey mission. something goes wrong and they start to leak oxygen - they are going to run out of air before the Enterprise returns and are left with no way to communicate with the ship.


Reed starts to record goodbye messages to his friends and family and Trip tries to find some way to save them, Trip wants Malcolm to do something but instead of leading by inspiration like a star fleet office should he just becomes down right mean. 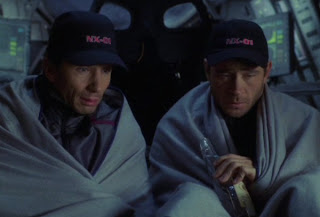 Apparently this episode is a cast favorite of  Dominic Keating and Rick Berman. I think they are all savages...
Posted by Unknown at 11:59 AM No comments:

So far the best episode.

T'Pol is to be held accountable for the discovery of the spy network in the 'Andorian incident' and is ordered to return to Vulcan. Archer is unhappy and goes to bat for her. 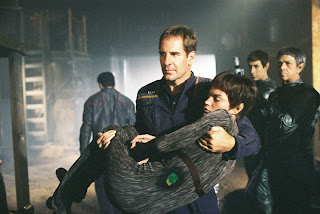 They plan to make a stop on a alien ally to the Vulcans and are kidnapped by some dissidents, and ransom is demanded.

Lucky for Archer he does not need to rely on his incompetent crew to rescue him, our good friends from Andoria are wanting to repay a debt to Archer. So they help with the rescue, Archer uses the indecent to convince the Vulcans to reconsider T'Pols recall. and everyone is happy. 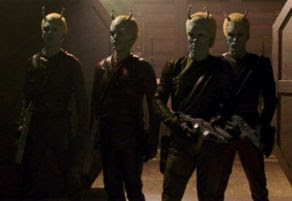 Look out its T'Pol in her Undies again Time!
So the Enterprise stops to look at a gas giant and lo and behold there is a mysterious ship stuck in the atmosphere. They send a shuttle down to the ship - turns out to be Klingon, and find the crew unconscious by some neurotoxin.

T'Pol want to leave and as normal she was right. The Away team gets trapped on the ship and needs to figure out how to escape, it turns out there is one member of the Klingon crew awake she steals there shuttle pod and escapes, only to be picked up by the enterprise. 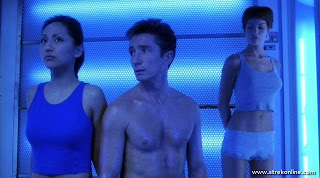 Basicly its a weak episode used to just get some crew members into the decon chamber again.
It also leaves me wondering... Why is T'Pol not in command, or at least not taken more seriously... She is pretty much always right...
Posted by Unknown at 10:54 PM 1 comment: